My family has a tradition that has been passed down from generation to generation.  I’m sure many other families have it as well, but I like to think it’s unique to us.  And that tradition is that we make an absolute shit-ton of food for family gatherings, and then act like it’s everybody else’s fault that they didn’t eat enough food to cover up the fact that:

a) we have no idea how to correctly predict the amount of food an averagely overweight person might consume, and

b) we were unable to find the Duggar-sized homeless family that we had hoped to bring so we could make ourselves feel better about making a 9×13 dish of spinach and artichoke dip for four people.

(To be fair, I only witnessed it from my great-grandmother on down, but I’m willing to assume this went back way further.  I can see my ancestors in 13th century Hungary roasting twenty pounds of mutton and complaining about how the Magna Carta was crippling the economy, while wondering what was wrong with everyone because there were thirteen loaves of Challah left over and those should clearly have been consumed by six people.)

(Yes, I know the Magna Carta was in England, not Hungary, shut up you laughed and you know it.)

The point of this is, despite us having turkey, mashed potatoes, stuffing, green bean casserole, a baked brie wheel, and bite-size shrimp and grits appetizers, I somehow felt like we might need a little something extra.  So I went back to one of my old favorites, sautéed mushrooms.

This recipe comes from Michael Chiarello’s Casual Cooking.  I’ve made a bunch of recipes from his cookbooks, and have never had one that was worse than just really, really good.

Now, the thing is, I got kinda lazy with this one, because I’d been in the kitchen for most of the previous two days (and one of them was with my mom, so really it felt more like 19 days).  And I didn’t feel like putting in a few hours of work on Thanksgiving Day, so I took some shortcuts.

The mushrooms came out pretty well, and were far less work than the original recipe.  I’m going to post the recipe I used, and then below it I will note how I deviated from the original.

I’m not going to kid you, the original recipe will taste better than the one I am giving you.  It will also take forever to make (if your family starts watching the John Hughes Anthology box set when you begin prep, you’ll finish cooking around the midpoint of Uncle Buck), and you will have to actively work it the entire time.  The recipe I give you will be really good, and will allow you to get smashed on the remainder of whatever white wine you choose to use while you wait for the mushrooms to finish roasting.

Well the author himself is a pretty big mess, but that’s another story.  If you make them my way, you’ll make some mess; if you make it from the original recipe, then yeah, it’s going to get pretty sloppy.

YOU’RE BURYING THE LEDE, WHAT’S THE DEAL WITH MICHAEL CHIARELLO?

Ok, so the good chef has a brief history of bad behavior.  And by brief I mean sexual harassment suits, DUI, and possession of a controlled substance (allegedly meth).

THAT’S PRETTY COOL!  THE RECIPE, HOW DO I MAKE A MESS OF THIS?

Peeling garlic is messy because the paper skin sticks to everything.  The sauce spatters a bit, so you will have to clean up a bit after that.  If you make it the long way, then the oil you sauté the mushrooms in will get everywhere.

Serves 8 as a side dish

Line two sheets pans with foil.  Dump the mushrooms evenly onto the pans, and roast for 25 minutes, rotating pans and stirring them up halfway through.  Remove ons from oven and dump the mushrooms into a bowl.

Add the garlic to the pan and sauté until just beginning to brown (watch this, the garlic can go from just golden brown to dark and bitter in a matter of seconds).  Add the lemon juice and thyme, and cook until the liquid evaporates.  Add the wine, turn the heat down to medium-low, and simmer for 3-4 minutes.

Pour sauce into bowl with mushrooms, add the parsley, stir, and serve. 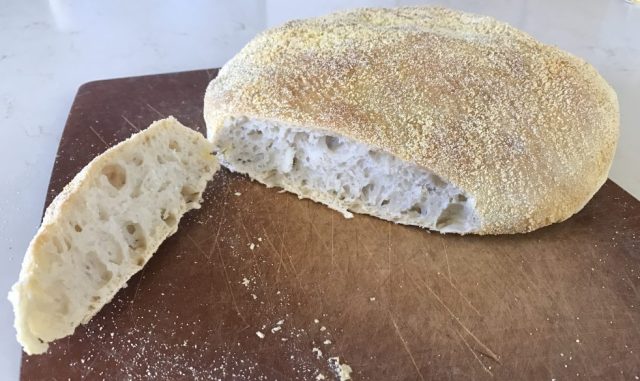 Bread was supposed to be this mysterious thing for so long.  You had to pray that the little yeast balls are still alive, get the water just hot enough to maximize their growth without being so hot that it kills them all, wait for them to belch their magical gases so the dough can rise, punch it down and knead it for 30 minutes, do that seven or eight times, shape it into a loaf or whatever, and hope that you didn’t knead out so much air that it comes out looking like matzo.

Then a few years ago, someone said, nah, fuck that, just dump it all in a bowl and stir it a few times, and blammo, bread.

And it’s pretty good bread too!  I mean, you couldn’t sell it in a bakery, but you could bring it to a party and people would think you worked all day on it, when in reality you just dumped a few ingredients into a bowl and then binge-watched Stranger Things.

The water temperature thing is a big deal too.  You don’t have to get the water to a certain temperature, room temperature is just fine.  A while back, I tried to impress my lady and make some cinnamon rolls, and I think the milk was too hot, because the dough didn’t rise a bit.  And they tasted fine, but they looked like these sad little people (thanks PC police!) cinnamon rolls, and she patted me on the head as if to say “aww, that was a nice try, I still love you despite your failings”.

Ok, that was quite the tangent.  Let’s get to the important stuff.

YOU SOUND VERY NON-COMMITAL, ARE YOU SURE THIS IS WORTH MAKING?

Anything with flour has the potential to make a mess.  It’ll get everywhere if you’re not careful, and you’ll be cleaning it up for years.  And the dough is sticky enough that your hands are going to get pretty messy when you form it into a ball.

WAIT, I THOUGHT YOU SAID THERE WAS NO KNEADING INVOLVED?

You’re not kneading, but you do have to pull it out of the mixing bowl and then form it into a ball using your fingers.  Hope that’s not too much to ask.

Good, because I’m writing this no matter what.

The recipe calls for instant yeast, I used active dry yeast, which is pretty much interchangeable for this recipe – if you’ve got either in those little yellow packets laying around, that should work fine.  You’ll have plenty left over for multiple loaves.

3 cups all-purpose or bread flour, plus a little for dusting

In a 2 quart bowl, whisk together the flour, salt, and yeast.

Add the water, and stir it together until it’s blended.  Don’t worry that it looks like hell, it’s supposed to.

By the 18 hour mark, you should see a bunch of bubbles on the surface.  See them?  Good!

Pull out a cutting board, or clean off a surface on your countertop, and dust it with some flour (a couple handfuls or so – you want just enough flour so it doesn’t stick to the surface, but not so much that it’s going to dry out the dough).  Carefully slide the dough onto the surface and fold it over onto itself twice.  Cover the dough loosely with plastic wrap, and let it rest for 15 minutes.

Coat a cotton towel with cornmeal.

Dust the dough very lightly with flour (this is supposed to keep it from sticking to your fingers – accept that there is no way it won’t stick to your fingers, and you’re going to have club hands when you’re done).  Gently shape it into a ball (you don’t want to squeeze our the magical yeast burp gasses), and lay it seam side down onto the towel.  Dust the top with more cornmeal.  Cover with another cotton towel and let it rise for 2 hours.

30 minutes before baking, heat the oven to 450 degrees, and put a 6-8 quart heavy pot in the oven, lid and all.  When you’re ready, carefully remove the pot from the oven and take the lid off.  Slide your hand under the towel, and turn the dough into the pot, so it’s seam side up – don’t worry if you don’t get it perfect.  Shake the pot a couple times to evenly distribute the dough.

Put the lid back on the top, and bake covered for 30 minutes.  Remove the lid, and bake it uncovered for another 15-30 minutes, or until the top browns and it gives you a hollow sound when you tap it on top (please be careful and don’t touch the pot when you’re doing that).

When it’s done, pull the pot out and carefully remove the bread (I use a metal spatula to pull up the side enough that you can grab it) and place it on a cooling rack.  Wait an hour or so before digging in.